In their magazine Leading Edge a nice summary of the start-up and a short history, but certainly a vision of the new Propeller Club Europe.
– Leading Edge (Autumn/Winter 2020) 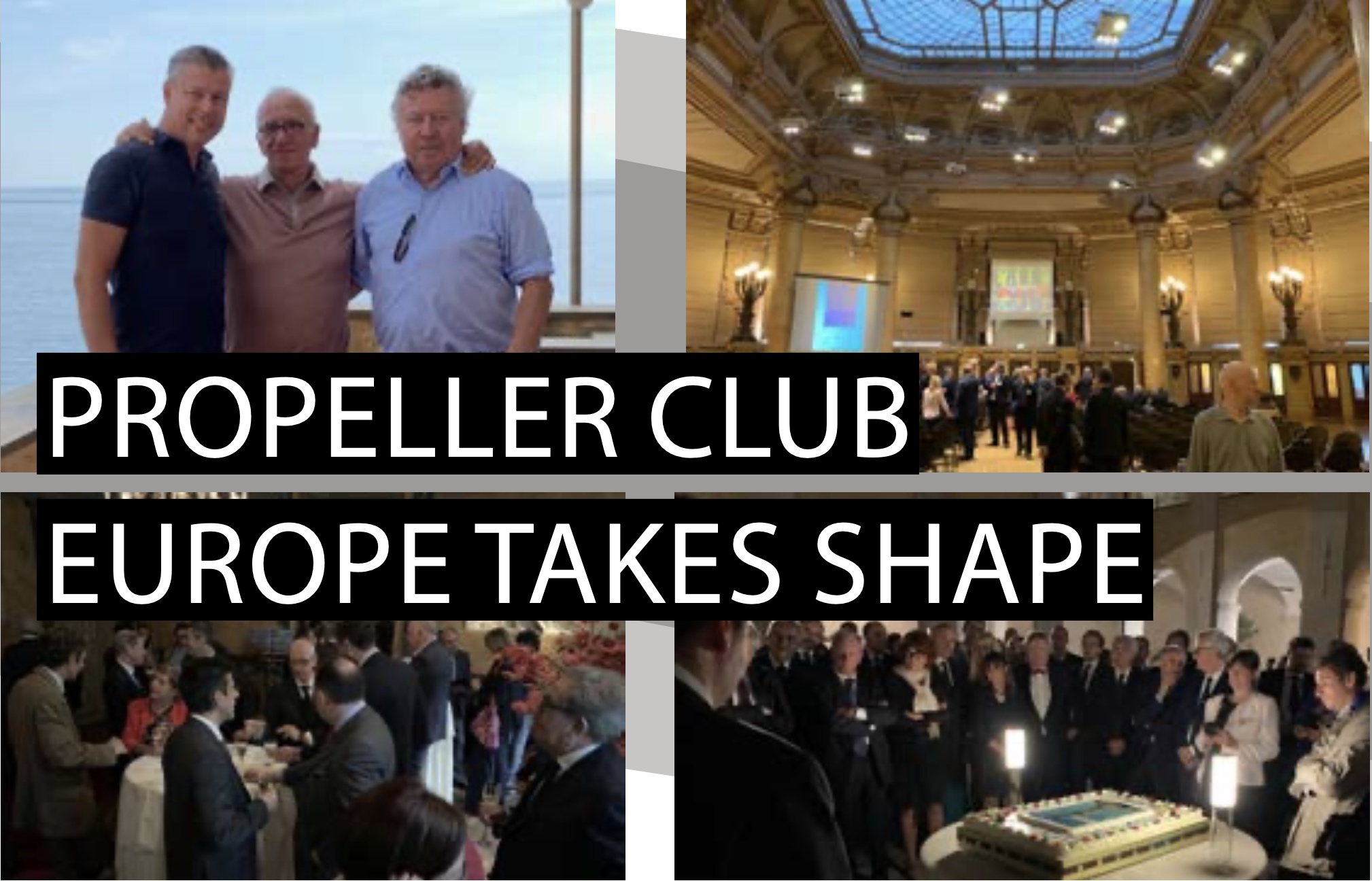 Given the very special situation in Italy, a sign of sympathy was sent by letter to the friends of The Internatonal Propeller Clubs. 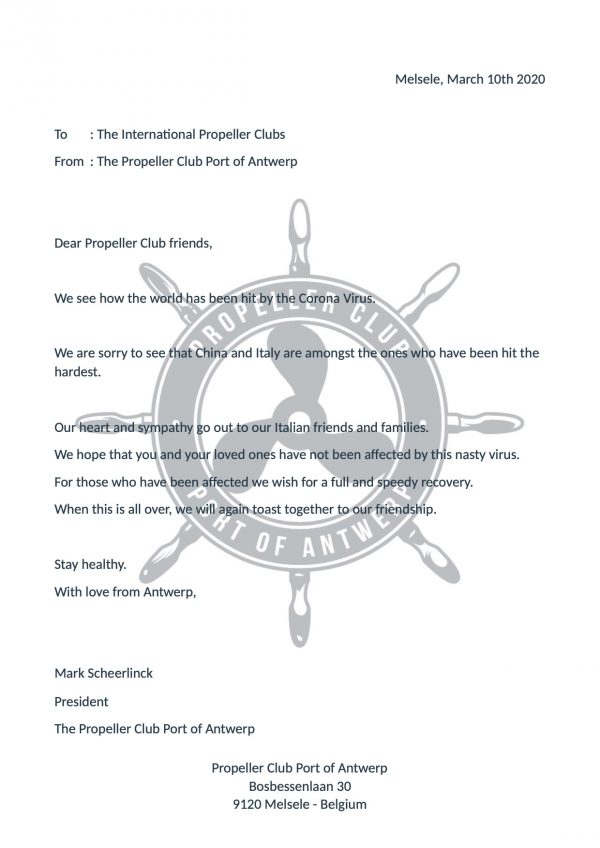 Dear Propeller Club friends,
We see how the world has been hit by the Corona Virus.

We are sorry to see that China and Italy are amongst the ones who have been hit the hardest.

Our heart and sympathy go out to our Italian friends and families.
We hope that you and your loved ones have not been affected by this nasty virus. For those who have been affected we wish for a full and speedy recovery.
When this is all over, we will again toast together to our friendship.

Stay healthy.
With love from Antwerp

The Propeller Club Port of Antwerp sets an independent course

The Antwerp Department of the Propeller Club, a business club of maritime professionals, now sails an independent course. Earlier, the divisions in Italy, Switzerland and Liverpool also went their own way.

The Propeller Club in the port of Antwerp was founded October 15th 1996. Now the Antwerp department goes its own independent way. “In a world of change, an organisation needs to question itself regularly,” says President Mark Scheerlinck. We note that the interests of our members are mainly in the European hinterland, combined with a worldwide reach. A strong European network imposes itself,  along with a strong local anchoring. The Board of Directors decided, together with the members at the Extraordinary General Assembly of October 8th 2019, to sail an independent course from now on. 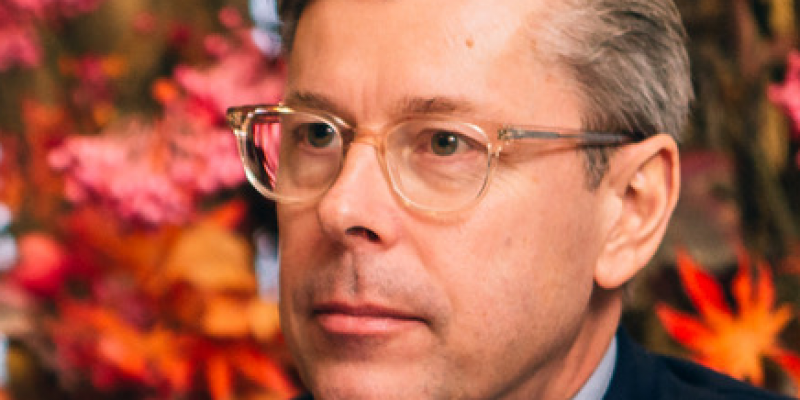 Meanwhile, the independent European Propeller Clubs are exchanging views and  contemplate on how to cooperate. A successful mission on October 10th to the Annual Convention of the Italian Propeller Clubs, together with the Propeller Club of Geneva, laid the basis for more European cooperation and exchanges between clubs. More than 2,000 maritime professionals unite that way. Other maritime clubs already showed interest. Joint missions to other ports are currently being planned.

The Propeller Club Port of Antwerp is rejuvenating: a new website, app and member administration support the renewal. A new logo completes the operation.

A more than interesting visit of the Propellerclub Italia. A full program with a gala diner in het former Imperial palace of Napoleon in Antwerp, a visit ti the iconic Havenhuis and a day trip to Rotterdam. 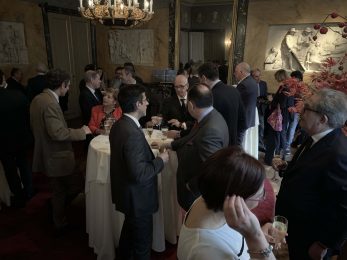 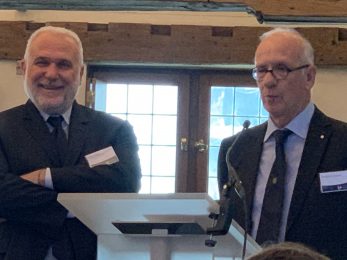 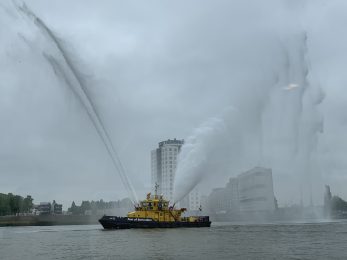 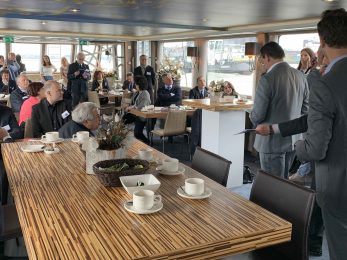 Visit to the Propeller Club Basel

The Propeller Club Port of Antwerp paid a visit to Propeller Club Basel, a club with over 300 members and the presence of the full Baseler Spediteurs Verein.
A unique opportunity to tighten the relations with our fellow-Propeller-members. 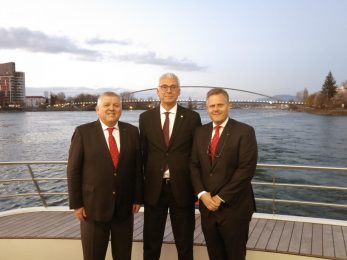 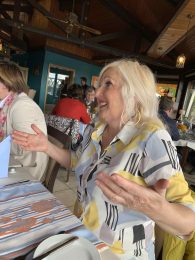